If you think that the installation looks like many other exhibitions in Europe over the last two decades,  you may be acutely aware of the spirit of the age,  borrowed from the German language as  Zeitgeist.  Philosophers associated with that idea include Herder and Spencer and Voltaire. It counters the Great Man theory popularized by Thomas Carlyle which sees history as the result of the actions of heroes and geniuses. 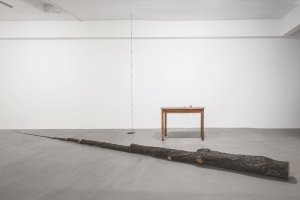 Roman Ondak (b 1966) and Štefan Papčo (b 1983), from their exhibition titled Sky Gravity (19 Jan – 16 March, 2018, Zahorian and Van Espen Gallery Bratislava) Ondak called his  exhibition in  South London Gallery (2026/17)   “The Source of Art is in the Life of a People” – a claim easily adapted to Platform members, e.g. Aoife Earley: Street Series 1-3 (Digital photo on c-type photo paper), 2018 taken by iPhone7; “I enjoy the convenience and connectivity of my phone camera” (gallery handout)

Earley also explores the chance mobile phone photography harvests while the photographer is mobile, i.e. driving or driven.  It may appear obvious for now and here. The implication is that the viewer’s mind drives the aesthetic experience.

Let me digress to test that.

In 1966, the philosopher Karl Popper conducted an informal experiment:  During a lecture at the University of Oxford, he turned to his audience and said: ‘My experiment consists of asking you to observe, here and now. I hope you are all cooperating and observing! However, I feel that at least some of you, instead of observing, will feel a strong urge to ask: “What do you want me to observe?”’

Then Popper delivered his insight into observation:

‘For what I am trying to illustrate is that, in order to observe, we must have in mind a definite question, which we might be able to decide by observation.’

The question for Earley appears to be the value and power of spontaneity. Of a flow which she arrests.

Andrew Glen(b1981) makes the “curious relationship between object, experience and artist”  into a locus that facilitates the choice of a found object.   Yes, it nods towards the Arte Povera, yet, it has an up-to-date root: Glen’s personal collection he started in 2015. On the far wall  the blue-green  Bute wool&found objects is a part of the ongoing series  ATOMICA. 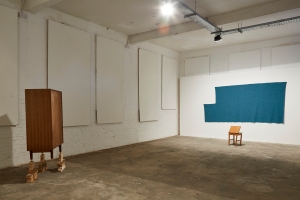 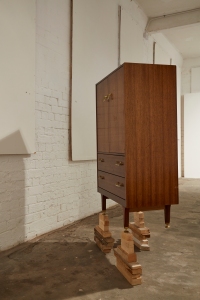 The cabinet and attached objects carry the title  “E. Gomme”, enigmatic for those of us who do not know the history of the G Plan furniture.  (https://www.gracesguide.co.uk/E._Gomme)

Andrew Glenn is recycling a useful object into a free art by canceling its usability, not miles away from Duchamp a century ago. 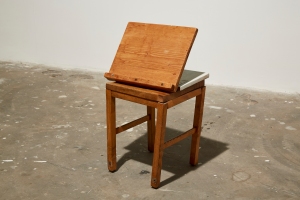 When a person visits an art exhibition they carry in their mind both “closed” and “open” questions.

The closed questions are “a priori” thoughts, likely to be connected to their previous experiences with and memories of art. They refer to similarities and differences. The open ones are those formed by dynamics of curiosity and creativity of the viewer on one hand and the power of the work of art (the artist).

It is not a straightforward process –  ‘All observation must be for or against a point of view,’ is how Charles Darwin put it in 1861. Hayley Gault included two long paragraphs in the gallery handout to explain how her curatorial practice which focused on environment and landscape was supposed to champion “ the value of exchange and types of transparency”.  She printed a stack of sheets listing similarities between her father, a farmer, and herself: an artist, curator, activist, researcher, writer.  She named this installation Things me and my father have in common.

Its roots are in installation art, in conceptual art, in early modernism minus Dada,  in the art and language tradition of the 1950s. It also echoes, perhaps unwillingly, the not so glittering removal of specific talent as the indispensable protector of visibility. (I have in mind those periods when we see the hegemony of ideology). Her exhibit confirms Ondak’s statement that “The Source of Art is in the Life of a People”. That includes the visual artist’s ingenuity in crafting questions, expectations, hypotheses, and theories to make sense of their subject – visibly.

This exhibition strips the objects of flattering their makers’ importance.  Instead, it matters what is vitally located in each exhibit.

Christopher McCambridge revives the conviction of William Morris that so-called lesser arts are equal to the rest because they are life supporting. Except, he moves in the other direction – towards the removal of the original practical use see http://www.chrismccambridge.wordpress.com/ 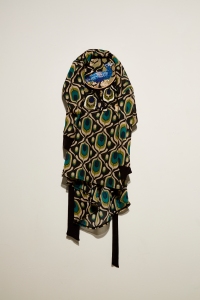 Hand stitching the fabric aims to remember the hand weaving of the cloth before it was more often machine – made.  Both processes (sewn by machine and by hand) are legibly there, so it is not a case of canceling one and replacing it. It is a method of a metamorphosis of one object becoming another. Remember Ovidius Naso? He seduced even  P Picasso to illustrate metamorphoses…

Here, it occurs by replacing the very value of use championed by W Morris.  Yet, McCambridge entertains a similar aim:  to make an object recognized as an aesthetic object by replacing the machine with a hand.

Something similar to a replacement appears on the surfaces of  Dreaddgerm, which Gerard Carson describes/defines as ” a manifestation of stratified oily techno objects, dredged from antediluvian sludge territories morphed into objects that speculate on the dark forces of techno-capitalist time”.  (Gallery handout)

Quite! I give up, but do not deny the link to the 1918 manifesto by Tristan Tzara quoted below.

To impose your ABC is a natural thing—
hence deplorable. Everybody does it in the form of crystalbluffmadonna, monetary system,
pharmaceutical product, or a bare leg advertising the ardent sterile spring. The love of
novelty is the cross of sympathy, demonstrates a naive je m’enfoutisme, it is a transitory,
positive sign without a cause.
But this need itself is obsolete.

Gerard Carson may agree with some of Tzara nonsense as nonsense, but in visual terms, he is a dead serious player for tacit communication between optic, haptic, and illusionary.

Stretched like elastic, it’s untethered from hermetica, blooming from conjunctions.

A speculation on futures via a tenuous materiality that is constantly on the verge of dissipating.

(Re)Mixing  from the mutating jungle of matter, feeding through a viscous interstitial mesh.

I see the chain and I read a sculpture, a rough immobile silent sibling to the chatting mobiles by Alexander Calder.  Its prettiness gives way to terrorizing sadness of broken lives,  broken by those dark forces, he mentioned.  In between the cascading down and never reaching the ground, it seems to stutter J’accuse (thinking of Emile Zola). And then it wiggles out and pretends that nothing matters, whispering: I am a construct.

exhibits installation with sculpture and print. It may be thought of as three objects not connected, but the way they are placed is softly considered to signal togetherness.

She gives it all one title: “Untitled (Inventory), 2018 (polyester casting resin, concrete, plaster, digital print). Maybe she entertains the thought of a chain, and not just of grouping. After all -she prefers traditional techniques – a kind of a chain, a thread,  between now and before. In her statement on the gallery handout she singles out the connections to locations and memory and preference for multiples, both an association with time. The supreme chain. 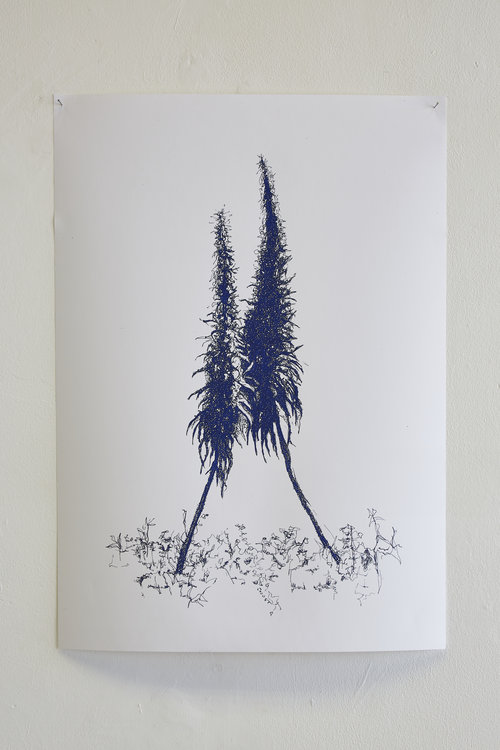 Her trees(or magnified weeds)  are like personages  – meeting in a meadow … I hesitate to rule out conflict, or an accident.

Moving away from the back wall, the visible space is dominated by Damian Magee.

Its dorso is empty. 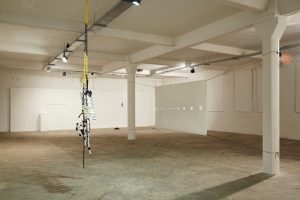 He suggests that it is a “depiction”  of Gigantomachy from the Pergamon Altar, based on a low resolution digital image.  (Gallery notes, image downloaded from Wikipedia))

It would appear that the drawing selects a perceived rhythm of the volumes as a wave of subjective attention.  Magee makes another claim for his drawing: ” This treatment of a fragment …seeks to explore the ways in which time has informed phenomenological shifts in the experience of cultural objects.”   As I understand it in relation to Hegel’s Phenomenology of Spirit published in 1807 and based on a precious philosophical intuition: consciousness is not a completed institution, it is constructed, transformed to become other than itself.  As if the selected wave is how the sculptural fragments appeared to Magee’s consciousness when he aimed to capture the essence of what he observed.  That subjectivity is one of many possible.

Iolanda Rocha  lets her subjectivity move on and on, claiming equivalence for each state of what she saw, recalled or imagined.  Those rich pickings are downsized by the summary title “Schema”. 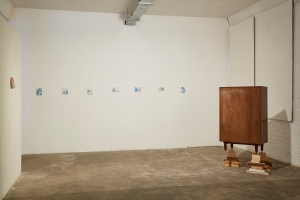 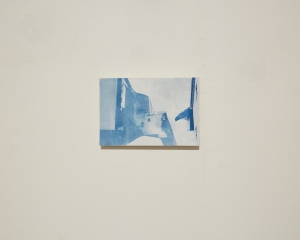 Each stands confidently alone and together as if there were identity between the two states of being. 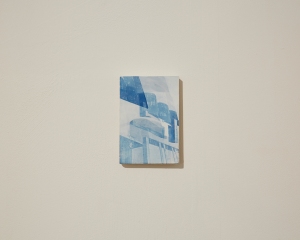 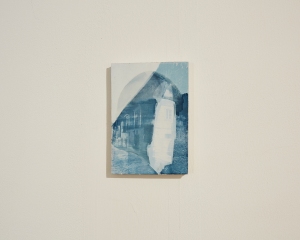 However the absence of nature – beyond signaling the atmosphere – become a significant sign of anthropocentrism and anthropomorphism.

Hannah Casey-Brogan aims at the intimacy of seeing, viewing, by altering the expected, normal,  when observing a small format image.  Her “Untitled” (oil on aluminium, 2018) does not fully escape into abstraction, allowing the red become an arch above a melee of either a very distanced crowd or some insect, or just a multitude of dark traces. 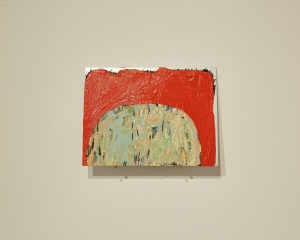 Another small-scale object is made with several materials: text, paper, vinyl, glass and frame. Jane Butler ‘s School of Thought #4,2017. 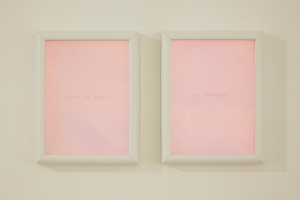 Reminiscent of the preoccupations by the Art and Language of 1967 -70  – it seems to be re-visiting the group’s early conceptual concerns as shown in the example below.

Alex Brunt installed a digital video, 19 mins, 2018 titled  Spit and Honey,
both those materials descending onto a head of a willing person. 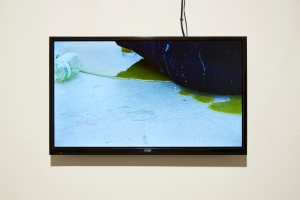 Reminiscent of cinema verite it exposes the visceral, the setup, the observed, fragmenting the whole, perhaps in a hope of lessening the chance of absence of any subversion of the intention, by sympathy or its opposite.
The exhibition felt like a sanctuary of vanishing ideals.  Subdued.
Images courtesy Platform, and Simon Mills.

writer on art View all posts by Slavka Sverakova

This site uses Akismet to reduce spam. Learn how your comment data is processed.